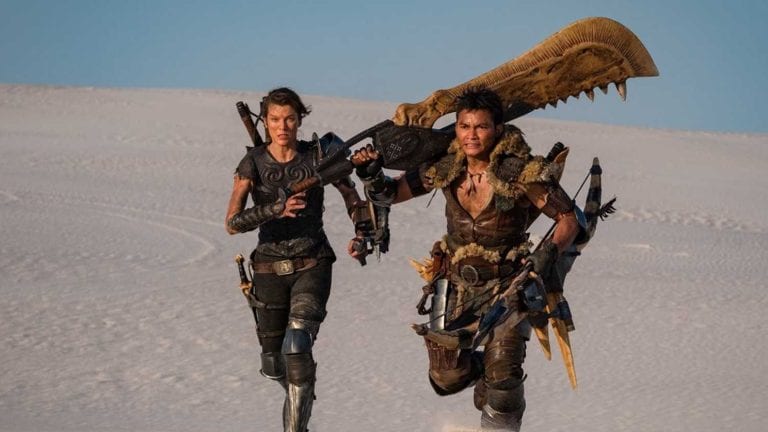 Monster Hunter is a Game Series from Capcom. The first game in the series came in 2004 and since then more and more games released from this series. The Monster Hunter series is Capcom’s 2nd most successful game series after “Evil Within”.

One of the actors that will play in the game is none other than Milla Jovovich. Milla already played in the movies that are based on the game series the “Evil Within”.

The movie will follow Officer Artmis and her crew into a world of full of huge monsters and the movie is about their survival in this horrific world. During the journey they will meet a veteran hunter that will teach them the way of the monster hunters.

From the teaser, we see that Artmis and the crew struggle to fight one of the fearsome monster in the desert. They will have to use weapons that go through the skin of the monsters and this will bring us to monster hunter series traditional weapons: Swords, Axes, Hammers, Lances,  range weapons like Bows and Heavy BowGun.

Making a movie about a game series is a big deal. On the one hand you have people who aren’t familiar with the games, and the movie can be a great tool to attract them into buying it. On the other hand, you have gamers who play and loved the game. These guys would love watching a movie that is based upon their favorite game, and would have high expectation of it.

And of course, we can’t forget about the monsters. The game is full of unique monsters and each one has special attributes and behavior. In the teaser we can see a desert monster called “Black Diablo”. This monster is very powerful so good luck for Artmis and her crew.

Along with Milla Jovovich another actors that will play in the movie are Ron Perlman, Tony Jaa, Diego Boneta and the Rapper T.I.

According to the teaser, the movie is expected to arrive to theaters in December.

And for the gamers here, the next game in the series will be called “Monster Hunter Rise” will arrive to the Nintendo Switch on March 13th, 2021.